The 2013 Seddon earthquake measured 6.5 on the Mww scale and was centred in New Zealand's Cook Strait, around 20 kilometres (12 mi) east of the town of Seddon in Marlborough. The earthquake struck at 5:09:30 pm on Sunday 21 July 2013 (05:09 UTC) at a depth of 13 kilometres (8 mi), according to Geonet. The United States Geological Survey also measured the quake at 6.5, at a depth of 17 kilometres (11 mi). The quake caused moderate damage in the wider Marlborough area and Wellington, the nation's capital city 55 kilometres (34 mi) north of the epicentre. Only minor injuries were reported. Several aftershocks occurred during 21–29 July.

The Seddon earthquake is considered the first of an earthquake doublet, with a second earthquake of similar magnitude occurring on 16 August 2013. 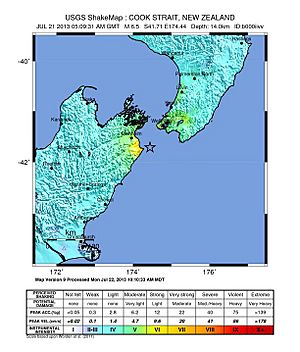 The earthquake was preceded by a series of foreshocks, the largest of which had a magnitude of 5.7.

The earthquake generated a series of aftershocks, the largest of which had a magnitude of 5.4.

Below is a list of all aftershocks magnitudes 5.0 and above that occurred in the region between 21 July 2013 and 2 August 2013.

The quake resulted in varying degrees of damage to thirty-five buildings within the Wellington CBD with glass from broken windows falling onto the main thoroughfares of Lambton Quay, Featherston Street, and Willis Street. Damage was also caused in Paraparaumu, Wainuiomata, Porirua and the Hutt Valley in the North Island.

The Wellington Region emergency management office was activated on the evening of 21 July, as were those in the lower part of the North Island. On 22 July parts of Wellington's central business district were closed to the public to allow for inspections to buildings with damaged and potentially dangerous façades.

Four people were injured in the quake, which lasted for 20 seconds, blowing out windows, cracking concrete and swaying buildings.

All content from Kiddle encyclopedia articles (including the article images and facts) can be freely used under Attribution-ShareAlike license, unless stated otherwise. Cite this article:
2013 Seddon earthquake Facts for Kids. Kiddle Encyclopedia.