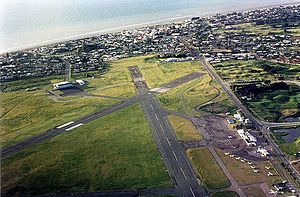 Paraparaumu is a town in the south-western North Island of New Zealand. It lies on the Kapiti Coast, 55 kilometres north of the nation's capital city, Wellington.

Like other towns in the area, it has a partner settlement at the coast called Paraparaumu Beach, which lies directly opposite Kapiti Island. The two towns form part of the Kapiti Coast District. Together with the nearby Raumati and Raumati South they are among the fastest-growing urban areas in New Zealand, and are major dormitory towns with workers commuting to the cities that make up the Wellington urban area. The four towns between them have a 2012 population of over 49,000 people. Inland behind Paraparaumu is the Maungakotukutuku area.

Paraparaumu means "scraps from an earth oven" in Māori: "parapara" means "dirt" or "scraps" and "umu" means "oven". It is commonly abbreviated to "Para-Param", particularly by longer-term residents of European ethnicity, and simply "Pram" by local youth.

Paraparaumu has an oceanic climate typical of New Zealand, with moderately warm summers and mild winters. It has a quite high rainfall frequency year round, although it is drier than many other coastal areas in the country.

Paraparaumu is located on the North Island Main Trunk Railway, on the Kapiti Line of Wellington's commuter railway network operated by Tranz Metro under the Metlink brand. Electrified commuter services were extended to Waikanae on 20 February 2011, and additional stations have been proposed at Lindale and Raumati. EM and FP class electric multiple units operate the commuter trains. Beyond Paraparaumu, Tranz Scenic operates two diesel-hauled long distance services: the Capital Connection between Palmerston North and Wellington, and the Overlander between Auckland and Wellington. Both trains stop at Paraparaumu. There are also feeder and local commuter bus services.

All content from Kiddle encyclopedia articles (including the article images and facts) can be freely used under Attribution-ShareAlike license, unless stated otherwise. Cite this article:
Paraparaumu Facts for Kids. Kiddle Encyclopedia.