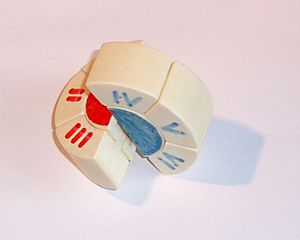 The Puck puzzle (also Picture Disc and Kép Korong in the original Hungarian) is a combination puzzle invented in 1980 by Hungarian physicist András Végh. The disc shaped puzzle consists of 2 central pieces - the inner disc - and segments forming a ring around the inner disc. The number of segments is an even number - most commonly six, eight, or twelve. The outer ring can be rotated around the central disc, similar to a wheel being rotated around its axis. The two parts of the central disc can also be rotated, together with the attached ring. With these operations, the combination of the parts can be changed. The goal of the game is to obtain a specific combination, such as forming a picture or ordering the number on the segments.

All content from Kiddle encyclopedia articles (including the article images and facts) can be freely used under Attribution-ShareAlike license, unless stated otherwise. Cite this article:
Puck puzzle Facts for Kids. Kiddle Encyclopedia.