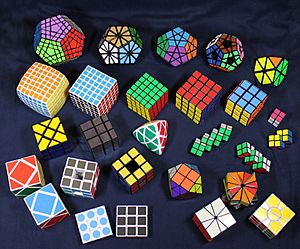 A combination puzzle, also known as a sequential move puzzle, is a puzzle which consists of a set of pieces which can be manipulated into different combinations by a group of operations.

A combination puzzle is solved by achieving a particular combination starting from a random (scrambled) combination. Often, the solution is required to be some recognisable pattern such as "all like colours together" or "all numbers in order". The most famous of these puzzles is the original Rubik's Cube, a cubic puzzle in which each of the six faces can be independently rotated. Each of the six faces is a different colour, but each of the nine pieces on a face is identical in colour, in the solved condition. In the unsolved condition colours are distributed amongst the pieces of the cube. Puzzles like the Rubik's Cube which are manipulated by rotating a section of pieces are popularly called twisty puzzles. They are often face-turning, but commonly exist in corner-turning and edge-turning varieties.

The mechanical construction of the puzzle will usually define the rules by which the combination of pieces can be altered. This leads to some limitations on what combinations are possible. For instance, in the case of the Rubik's Cube, there are a large number of combinations that can be achieved by randomly placing the coloured stickers on the cube, but not all of these can be achieved by manipulating the cube rotations. Similarly, not all the combinations that are mechanically possible from a disassembled cube are possible by manipulation of the puzzle. Since neither unpeeling the stickers nor disassembling the cube is an allowed operation, the possible operations of rotating various faces limit what can be achieved.

Although a mechanical realization of the puzzle is usual, it is not actually necessary. It is only necessary that the rules for the operations are defined. The puzzle can be realized entirely in virtual space or as a set of mathematical statements. In fact, there are some puzzles that can only be realized in virtual space. An example is the 4-dimensional 3×3×3×3 tesseract puzzle, simulated by the MagicCube4D software.

There have been many different shapes of Rubik type puzzles constructed. As well as cubes, all of the regular polyhedra and many of the semi-regular and stellated polyhedra have been made.

A cuboid is a rectilinear polyhedron. That is, all its edges form right angles. Or in other words (in the majority of cases), a box shape. A regular cuboid, in the context of this article, is a cuboid puzzle where all the pieces are the same size in edge length. Pieces are often referred to as "cubies".

There are many puzzles which are mechanically identical to the regular cuboids listed above but have variations in the pattern and colour of design. Some of these are custom made in very small numbers, sometimes for promotional events. The ones listed in the table below are included because the pattern in some way affects the difficulty of the solution or is notable in some other way.

An irregular cuboid, in the context of this article, is a cuboid puzzle where not all the pieces are the same size in edge length. This category of puzzle is often made by taking a larger regular cuboid puzzle and fusing together some of the pieces to make larger pieces. In the formulae for piece configuration, the configuration of the fused pieces is given in brackets. Thus, (as a simple regular cuboid example) a 2(2,2)x2(2,2)x2(2,2) is a 2×2×2 puzzle, but it was made by fusing a 4×4×4 puzzle. Puzzles which are constructed in this way are often called "bandaged" cubes. However, there are many irregular cuboids that have not (and often could not) be made by bandaging.

All content from Kiddle encyclopedia articles (including the article images and facts) can be freely used under Attribution-ShareAlike license, unless stated otherwise. Cite this article:
Combination puzzle Facts for Kids. Kiddle Encyclopedia.