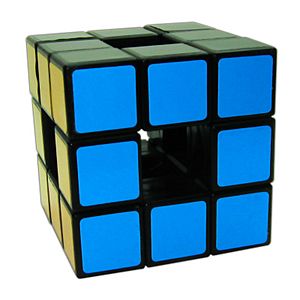 The Void Cube is a 3-D mechanical puzzle similar to a Rubik's Cube, with the notable difference being that the center pieces are missing, which causes the puzzle to resemble a level 1 Menger sponge. The core used on the Rubik's Cube is also absent, creating holes straight through the cube on all three axes. Due to the restricted volume of the puzzle it employs an entirely different structural mechanism from a regular Rubik's Cube, though the possible moves are the same. The Void Cube was invented by Katsuhiko Okamoto. Gentosha Education, in Japan, holds the license to manufacture Void Cubes. 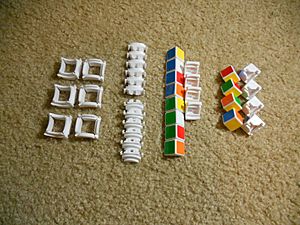 The parts of a Void Cube are:

Essentially, the "frame" of the mechanism comprises six identical pieces with square holes (the ones you can look through). Part of the interior of each hole is the inside surface of these pieces. Say that one of them is lying separately on a work surface, "exterior" side facing up. If you look straight down at one of these pieces (so your line of sight is parallel to that face's rotational axis) its exterior is also square.

Seen from a more-typical oblique position, however, each side of a square piece is somewhat akin to a low arch that joins neighboring corners. The low part of that arch engages mostly-hidden internal sliding pieces that (among other functions) support the edge cubies. The high surface of the arch includes convex curved circular flanges that engage grooves inside the cubies, to hold the structure together.

When all faces of the puzzle are in their normal aligned state, these six pieces are akin to the sides of an internal cube. Each one is free to rotate without any obstruction from the other five pieces. When a face is rotated, its own square piece also rotates with that face's cubies, but that square piece's own flanges do not move relative to the cubies.

As described so far, however, the individual parts of the mechanism would move out of position easily. Each edge of the puzzle therefore includes a mostly-hidden sliding piece (already mentioned) with a complex shape that includes a curved dovetail surface. This surface is widest at its innermost extension, and in the center of the piece along its length. The dovetail of this piece, acting somewhat like a wedge, keeps neighboring square pieces spaced apart.

Keeping the square pieces apart ensures that the grooves inside the cubies stay engaged with the flanges. Close manufacturing tolerances result in sufficient friction to keep parts of the puzzle from moving on their own, but also still allow easy movement.

Edge cubies fit onto positioning lugs on the exteriors of these internal sliding pieces, so that rotating a face makes its edge cubies push the sliding pieces around in a circle. The interior surfaces that face inward toward the hole drive this face's square piece so that it rotates with the cubies.

The square pieces ensure that these internal sliding pieces stay toward the edges of the puzzle.

Edge cubies in their normal position are retained by the flanges of neighboring square pieces. Corner cubies are retained by a trio of short circular flanges at the ends of the interior sliding pieces. When a face is rotated, those short flanges temporarily retain edge cubies, particularly when the face is rotated about 1/8 of a turn (roughly 45 degrees). As well, the corner cubies are temporarily retained by the curved flanges on the neighboring square pieces. During a rotation, flanges "change roles" as cubies travel along their circular paths.

All content from Kiddle encyclopedia articles (including the article images and facts) can be freely used under Attribution-ShareAlike license, unless stated otherwise. Cite this article:
Void Cube Facts for Kids. Kiddle Encyclopedia.