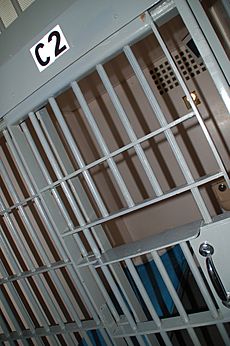 Punishment is when something is done to a person (or animal) that they do not like. It may be because they broke a rule. There are many kinds of punishment, from a death penalty for very bad crimes, to things that parents may do to punish children, like putting them in "time out" or taking away their toys.

Punishment can be seen as good in society to prevent people from doing bad things. It can also seen as cruel and unnecessary. It can also be seen to do more harm than good.

All content from Kiddle encyclopedia articles (including the article images and facts) can be freely used under Attribution-ShareAlike license, unless stated otherwise. Cite this article:
Punishment Facts for Kids. Kiddle Encyclopedia.