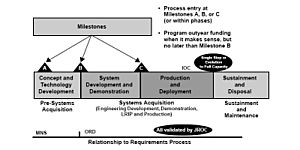 Model of the Acquisition Process.

Purchasing is the buying of goods or services. An item that has been bought is called a purchase. The opposite of a purchase is a sale. In common usage, the shorter word "buy" is typically used when shopping, rather than the word "purchase".

However, the word has been used in many major historical terms, including:

The word purchase is often used in contracts with "acquisition", as in the term "Acquisitions and Mergers" (A&M) in legal agreements made between large companies. Those contracts typically state than a company was purchased by another company.

All content from Kiddle encyclopedia articles (including the article images and facts) can be freely used under Attribution-ShareAlike license, unless stated otherwise. Cite this article:
Purchase Facts for Kids. Kiddle Encyclopedia.