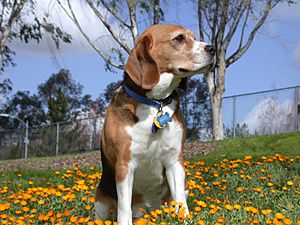 A purebred dog typically refers to a dog of a modern dog breed with a documented pedigree in a stud book and may be registered with a breed club that may also be part of a national kennel club.

Purebred dog may also be used in a different manner to refer to dogs of specific dog types and landraces that are not modern breeds. An example is cited by biologist Raymond Coppinger, of an Italian shepherd who keeps only the white puppies from his sheep guardian dog's litters, and culls the rest, because he defines the white ones as purebred. Coppinger says, "The shepherd's definition of pure is not wrong, it is simply different from mine." However, the usual definition is the one that involves modern breeds.

All content from Kiddle encyclopedia articles (including the article images and facts) can be freely used under Attribution-ShareAlike license, unless stated otherwise. Cite this article:
Purebred dog Facts for Kids. Kiddle Encyclopedia.