Kids Encyclopedia Facts
This page is about the shape. For the structure, see Pyramid. 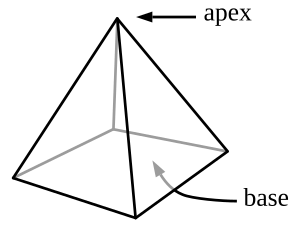 This means that one must find the volume by multiplying the base (B) by the height (h), then dividing the product by three. The base is also known as the product of the length and the width, thus this formula could alternatively be written:

Either way works, but the technical formula for the volume of a pyramid is the former, due to its use of the capital B, which is shorthand for length and width as previously mentioned.

All content from Kiddle encyclopedia articles (including the article images and facts) can be freely used under Attribution-ShareAlike license, unless stated otherwise. Cite this article:
Pyramid (geometry) Facts for Kids. Kiddle Encyclopedia.