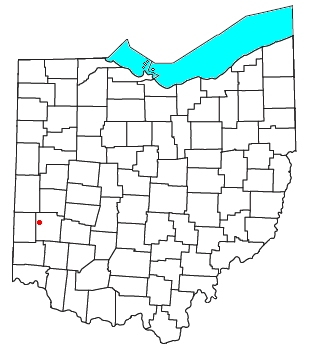 Pyrmont is an unincorporated community in northwestern Perry Township, Montgomery County, Ohio, United States. It lies at the intersection of Sulphur Springs and Providence Roads with the Brookville-Pyrmont Pike. Located in the far west of the county, it lies several miles from the city of Dayton; the nearest city is Brookville, 3 miles (5 kilometers) to the northeast. Pyrmont is a part of the Brookville Local School District. Pyrmont was a busy town before interstate 70 was established near Brookville. Pyrmont was on the Stage Coach Wagon route. Then Interstate 70 was formed.

Pyrmont was laid out in 1835, and named after Pyrmont, Germany, the native home of a first settler. A post office called Pyrmont was established in 1844, and remained in operation until 1910.

All content from Kiddle encyclopedia articles (including the article images and facts) can be freely used under Attribution-ShareAlike license, unless stated otherwise. Cite this article:
Pyrmont, Ohio Facts for Kids. Kiddle Encyclopedia.