Quercus minima, the dwarf live oak or minimal oak, is a North American species of shrubs in the beech family. It is native to the southeastern United States.

Quercus minima is an evergreen or semi-evergreen shrub rarely more than 2 meters (6.7 feet) tall, reproducing by seed and also by means of underground rhizomes. It commonly forms extensive cloned colonies with many stems, many of them unbranched. Leaves are alternate, up to 12 cm (4.8 inches) long, and toothless or with irregular teeth or lobes. Lobes, when present, are usually spine-tipped. Leaves are retained through the winter, dropping just before or as new growth resumes in late winter or early spring.

Quercus minima is native to the coastal plain of the southeastern United States, primarily in Florida but extending from there to the Carolinas and eastern Louisiana. There are reports of the species also growing in Texas, but these populations appear to belong to other taxa.) 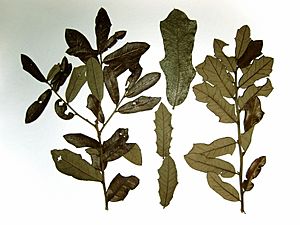 All content from Kiddle encyclopedia articles (including the article images and facts) can be freely used under Attribution-ShareAlike license, unless stated otherwise. Cite this article:
Quercus minima Facts for Kids. Kiddle Encyclopedia.