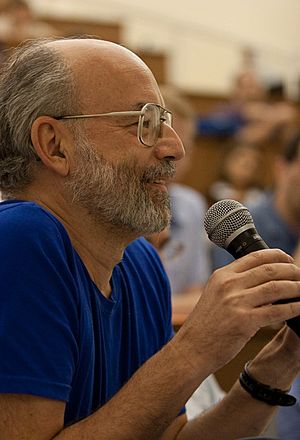 Adi Shamir, one of the authors of RSA: Rivest, Shamir and Adleman

RSA (Rivest–Shamir–Adleman) is an algorithm used by modern computers to encrypt and decrypt messages. It is an asymmetric cryptographic algorithm. Asymmetric means that there are two different keys. This is also called public key cryptography, because one of the keys can be given to anyone. The other key must be kept private. The algorithm is based on the fact that finding the factors of a large composite number is difficult: when the factors are prime numbers, the problem is called prime factorization. It is also a key pair (public and private key) generator.

All content from Kiddle encyclopedia articles (including the article images and facts) can be freely used under Attribution-ShareAlike license, unless stated otherwise. Cite this article:
RSA algorithm Facts for Kids. Kiddle Encyclopedia.