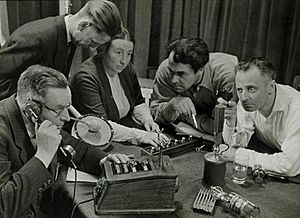 Recording a radio play in the Netherlands (1949), Spaarnestad Photo

A radio drama (audio or radio play, dramatized audiobook) is a live or recorded performance of actors without visual elements. It is usually heard on radio or published as audiobook. Radio drama is often described as "cinema for the ears". It had its greatest popularity in the Golden Age of Radio, before television was introduced.

All content from Kiddle encyclopedia articles (including the article images and facts) can be freely used under Attribution-ShareAlike license, unless stated otherwise. Cite this article:
Radio drama Facts for Kids. Kiddle Encyclopedia.