The Ragamuffin is a breed of domestic cat. It was once considered to be a variant of the Ragdoll cat but was established as a separate breed in 1994. Ragamuffins are notable for their friendly personalities and thick, rabbitlike fur. Much like the ragdoll, they are also one of the laziest breeds, because of this they should be kept as indoor pets.

Ragamuffins are a muscular, heavy breed of cat needing approximately four to five years to fully mature. The physical traits of the breed include a rectangular, broad-chested body with shoulders supporting a short neck. These cats are classified as having heavy bones and a "substantial" body type.

The head is a broad, modified wedge with a moderately rounded forehead with short or medium-short muzzle and an obvious nose dip. The muzzle is wide with puffy whisker pads. The body should appear rectangular with a broad chest and broad shoulders and moderately heavy muscling in the hindquarters, with the hindquarters being equally broad as the shoulders. A tendency toward a fatty pad in the lower abdomen is expected. Fur length is to be slightly longer around the neck and outer edges of the face, resulting in the appearance of a ruff. Texture is to be, soft, dense and silky. Every color and pattern is allowable, with or without white. Their coats can be solid color, stripes, spots or patches of white, black, blue, red, cream, chocolate, lilac, cinnamon, seal brown or mixed colors. Their eyes can be any solid color, with some exhibiting heterochromia. 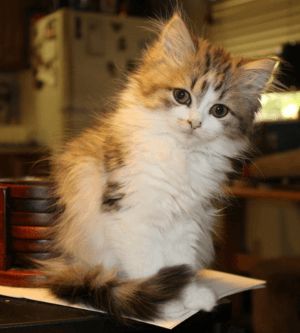 The IRCA Cherubim Cats developed from 1971-1994 (23 years) were used as the foundation cats for the RagaMuffin Breed and included the IRCA Miracle Ragdolls, Ragdolls, Honey Bears, and Maxamillion lines.

In contrast, their cousin the Ragdoll Breed was founded with only the IRCA Ragdoll lines developed from 1971-1975 (4 years).

In the 1960s, a regular, non-pedigreed, white, domestic long-haired cat named Josephine (of unknown Angora or Persian stock), who had produced several litters of typical kittens, eventually produced a litter of unusually docile kittens. When the subsequent litter produced more of the same, Ann Baker (an established cat breeder) purchased several kittens from the owner and set out to create what is now known as the Ragdoll. The sires were of unrecorded Birman or Burmese ancestry.

In 1975, after a group of IRCA Ragdoll breeders left, Baker decided to spurn traditional cat breeding associations. She trademarked the name "Ragdoll" and “Cherubim” and set up her own registry, International Ragdoll Cat Association (IRCA). Baker imposed stringent standards on anyone who wanted to breed or sell cats under that name. The IRCA Ragdolls were also not allowed to be registered in other breed associations.

In 1994, a group of IRCA breeders decided to leave and form their own group because of the increasing restrictions. Owing to Baker's trademark on the name Ragdoll and ‘’Cherubim’’, the group renamed its stock of IRCA Cherubim Cats Ragamuffins. While the originally proposed name was Liebling, the name RagaMuffin was put forth as an alternative by Curt Gehm, one of the group's founders, and it was chosen.

In the spirit of bettering the breed's genetic health, personality, and temperament, the group selectively allowed a limited amount of outcross to Domestic Longhair cats that appeared to already fit the Standard of Perfection established in ACFA. Later, once the Domestic Longhair Cat allowance expired, outcrosses allowed historically include Persians. The group also allowed some limited outcrossing to IRCA Ragdolls initially (ended in 2010 for ACFA-recognized Ragamuffins). Only cats with at least one RagaMuffin parent and an accepted outcross in ACFA/CFA/GCCF currently qualify to be called Authentic RagaMuffins. Cat Fanciers' Association, American Cat Fanciers Association, Governing Counsel of the Cat Fancy

The most obvious difference between typical RagaMuffins and Ragdolls is the required point coloration in Ragdolls, where as the RagaMuffin is allowed any color and pattern. The Standard of Perfection describes the RagaMuffin as requiring a ‘Sweet’ overall expression with large, rounded with pinch at the corner Walnut Shaped Eyes versus the Ragdoll's thinner, slightly angled Almond Shaped eyes. Adding to the sweet expression, RagaMuffins have rounded contours between the ears and a nose scoop versus the Ragdoll which calls for flat planes. RagaMuffins call for a flatter topline and Ragdolls call for a more angular topline with the raised hind quarter. RagaMuffin coats are to be Plush in texture and the Ragdoll allows for both Silky or Plush coats.

Ragamuffins come in all patterns and colors, although colorpoints are permitted to be registered and bred they are not allowed to be shown in CFA. Their eyes can be any solid color, with some exhibiting heterochromia.

All content from Kiddle encyclopedia articles (including the article images and facts) can be freely used under Attribution-ShareAlike license, unless stated otherwise. Cite this article:
Ragamuffin cat Facts for Kids. Kiddle Encyclopedia.