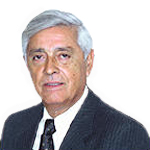 Hidalgo Ramon Vega (February 1, 1934 - May 7, 2014) was a Chilean politician and military personal. He was commander in chief of the Chilean Air Force. In 1998 he was appointed institutional senator, a position he held starting in 1998. He left office in 2006.

Hidalgo was born in Santiago, Chile. He died there from heart failure, aged 80.

All content from Kiddle encyclopedia articles (including the article images and facts) can be freely used under Attribution-ShareAlike license, unless stated otherwise. Cite this article:
Ramón Vega Hidalgo Facts for Kids. Kiddle Encyclopedia.