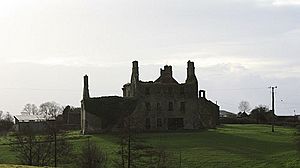 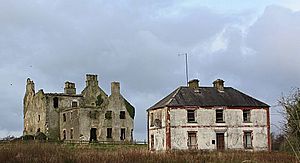 House Built in front of Castle

Rappa Castle was held by the Bourke family and was granted to a Cromwellian soldier named Crofton. In the 17th century William Knox of Castlerea (born 1630) married a Crofton of Rappa Castle. The castle remained the home of the Knox family until the 1920s.

The castle is a listed protected structure.

All content from Kiddle encyclopedia articles (including the article images and facts) can be freely used under Attribution-ShareAlike license, unless stated otherwise. Cite this article:
Rappa Castle Facts for Kids. Kiddle Encyclopedia.