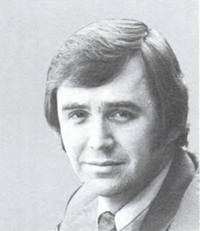 Raymond Peter "Ray" Kogovsek (August 19, 1941 – April 30, 2017) was an American politician. He served as a member of the United States House of Representatives representing Colorado's 3rd congressional district from January 3, 1979 through January 3, 1985. He was a member of the Democratic Party. He then served in the Colorado Senate from 1974 to 1978.

All content from Kiddle encyclopedia articles (including the article images and facts) can be freely used under Attribution-ShareAlike license, unless stated otherwise. Cite this article:
Raymond P. Kogovsek Facts for Kids. Kiddle Encyclopedia.