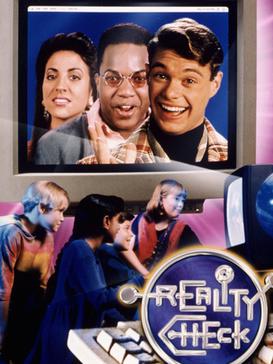 Reality Check was a 1995 television show starring Ryan Seacrest as Jack Craft, a 19-year-old inventor who gets stuck in his computer mainframe project on June 8, 1995. The two Bonner siblings (Samantha and Nicholas) reactivate the computer on September 17, 1995, attempting to get Jack Craft out of the mainframe, while also encountering additional members of the project.

The show was broadcast under syndication with each episode running for 15 minutes including commercials. It was produced in association with S & S Productions and ran for fourteen episodes before ending.

All content from Kiddle encyclopedia articles (including the article images and facts) can be freely used under Attribution-ShareAlike license, unless stated otherwise. Cite this article:
Reality Check (American TV series) Facts for Kids. Kiddle Encyclopedia.