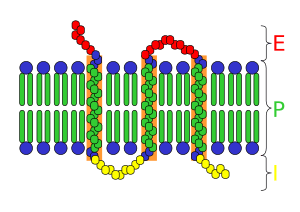 In cell biology, a receptor is a special structure that can be found in cell membranes. These are made of protein molecules such as glycoproteins. Receptors bind (attach) to specialised molecules. If the receptor has this molecule, it is activated, but if it does not it is deactivated. Depending on its state, a change inside the cell happens.

Cell surface receptors (membrane receptors, transmembrane receptors) take part in communication between the cell and the outside world. Extracellular signalling molecules (usually hormones, neurotransmitters, cytokines, growth factors or cell recognition molecules) attach to the receptor. This triggers changes in the function of the cell. The process is called signal transduction: The binding starts a chemical change on the inside of the membrane.

Receptors work like locks and keys. With the key, the lock can be locked or unlocked. If it is unlocked, the door belonging to it can be opened.

Part of the receptor sticks out of the cell membrane. The same applies to the membranes of cell organelles. A receptor's main function is to recognize and respond to a specific ligand, for example, a neurotransmitter or hormone. Some receptors respond to changes in 'transmembrane potential' (the difference in electric potential between the inside and the outside of a cell).

The middle part, inside the membrane itself, is a protein-lined pore through the membrane, or 'ion channel'. When the ligand binds to the surface, the pore becomes accessible to ions, which then pass through. In other cases, where differences in electric potential occur, the receptor changes in shape, which causes change inside the cell.

The inside (or cytoplasmic) part of the receptor interacts with the inside of the cell or organelle. There are several different kinds of receptor, each of which acts in a different way.

All content from Kiddle encyclopedia articles (including the article images and facts) can be freely used under Attribution-ShareAlike license, unless stated otherwise. Cite this article:
Receptor (cell biology) Facts for Kids. Kiddle Encyclopedia.