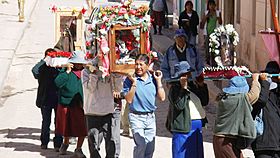 A religious belief is a strong belief in a supernatural power or powers that control human destiny. Religious beliefs often are about the cause, nature, and purpose of the universe and involve devotion, ritual practices and rules which must be followed.

All content from Kiddle encyclopedia articles (including the article images and facts) can be freely used under Attribution-ShareAlike license, unless stated otherwise. Cite this article:
Religious belief Facts for Kids. Kiddle Encyclopedia.