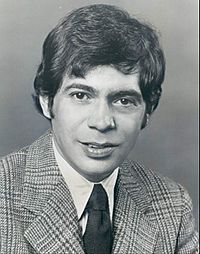 He was known for his roles as Inspector "Chico" González in 1971's Dirty Harry, as prison official Ramon Herrera in Bad Boys (1983), and as Detective Tony Gonzales in the action movie Cobra (1986).

Santoni died on August 1, 2020 under hospice care in Los Angeles from cancer at the age of 81.

All content from Kiddle encyclopedia articles (including the article images and facts) can be freely used under Attribution-ShareAlike license, unless stated otherwise. Cite this article:
Reni Santoni Facts for Kids. Kiddle Encyclopedia.