Rent One Park facts for kids

Rent One Park is a stadium in Marion, Illinois that was completed in 2007. It is primarily used for baseball and is the home of the Southern Illinois Miners of the Frontier League.

The stadium has a contemporary, non-traditional look, void of the common red brick and green steel common among ballparks around the United States.

One of the most unusual features of the new stadium is the roof, which slopes down toward the field. As a result, foul balls hit by players can sometimes roll back down for spectators to catch.

The Frontier League stadium is located roughly 120 miles southeast of St Louis on Interstate 57. There are over 3,400 standard armchair ballpark seats including wider chair seating behind home plate. Down the left field line and in the outfield is lawn seating that can accommodate over 2,000 fans. Rent One Park also has two picnic gardens: Budweiser Bullpen Bar-n-Grille down the right field line that can host as many as 250 people and the Rent One Picnic Garden located in the outfield with seating for over 500 people. The upper level features 14 luxury suites and an enclosed banquet area for approximately 200 persons.

Rent One Park also contains an open-air entry plaza, home and visitor clubhouses, dedicated maintenance building, administrative offices, and team store. The scoreboard and video board are accompanied by 12 panels for advertisement on the right-field wall, beyond and above the bullpens. Down the left field side in the corner of the park is the Fun Zone, a children's play area with 4 inflatable games. The inflatable games include baseball, basketball, wiffle ball, and skee-ball.

The company that holds the naming rights, Rent One, is a rent-to-own retail store chain. 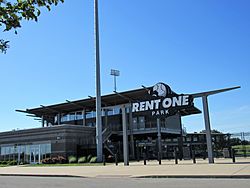 The first game in the park was played May 29, 2007. Over 6,200 fans saw the Southern Illinois Miners defeat the Evansville Otters 9-6.

On August 10, 2007, the Southern Illinois Miners broke the Frontier League regular season single game attendance record with 6,718 fans. In that game at Rent One Park, the Miners defeat the River City Rascals 8-0.

In their first season the Miners also broke the single season attendance record by hosting 259,392 fans, averaging over 5,000 fans per game.

Because Rent One Park has Sportexe Turf instead of regular grass and dirt, events other than baseball can be held there throughout the year, including live concerts.

All content from Kiddle encyclopedia articles (including the article images and facts) can be freely used under Attribution-ShareAlike license, unless stated otherwise. Cite this article:
Rent One Park Facts for Kids. Kiddle Encyclopedia.