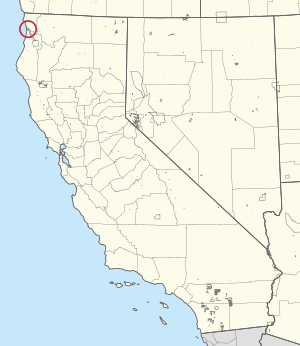 A resident population of 36 persons was reported during the 2000 census. The 2010 US Census shows a decrease, with a population of 31. It is entirely surrounded by the Yurok Indian Reservation.

In 1938, the US government purchased 228 acres from a man named Augustus Resighini. This land became a reservation in 1939. In 1975, members formed a tribal government that was approved by the Secretary of Interior.

Resighini Rancheria tribal members participate in traditional dances such as the Brush Dance, as well as the Jump Dance and White Deer Skin Dance.

The Brush Dance is a ceremony held to heal a sick child or to pray for a long, healthy life for the child. Families come together around a dance pit, beginning on a Wednesday where the medicine doctor, the child and the child's family begin. Actual dancing begin on Thursday evening with two dances. Both females and males dance.

The Jump Dance lasts for 10 days. The Jump Dance was revived in 1984. The dance is held to prevent sickness, to bring happiness, and to restore balance in the universe. The dancers wear elaborate outfits, including headdresses with 70 redheaded woodpecker scalps. In addition to the headdress, the dancers also wear dentalia shell necklaces and a deerskin skirt and they carry a Jump Dance basket in the right hand.

The White Deerskin Dance is generally held around same time as the Jump Dance. Canoes are used to transport dances. It seems dancers carry poles with deer heads draped by deerskins. This dance provides protection to the people. This dance was also recently revived.

Tribal members also engage in the traditions of storytelling, gathering seaweed, mussels and other marine resources for basket making, and subsistence fishing for salmon, trout and eel and other species.

The ranchería is served by the Del Norte County Unified School District.

All content from Kiddle encyclopedia articles (including the article images and facts) can be freely used under Attribution-ShareAlike license, unless stated otherwise. Cite this article:
Resighini Rancheria Facts for Kids. Kiddle Encyclopedia.