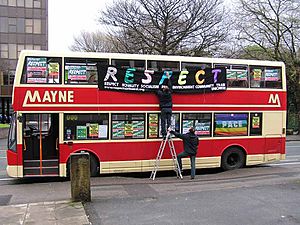 Respect campaigners decorating a bus in Manchester for the 2005 elections

The Respect Party, the Unity Coalition, is a far-left political party in the United Kingdom. It was started on 25 January 2004 in London. Its name is an acronym standing for Respect, Social equality, Socialism, Peace, Environmentalism, Community, and Trade union. It is often simply called "Respect". The respect party, as a given, tries to put forward policies of respect. Their first member of parliament was George Galloway. He is the party's leader.

All content from Kiddle encyclopedia articles (including the article images and facts) can be freely used under Attribution-ShareAlike license, unless stated otherwise. Cite this article:
Respect Party Facts for Kids. Kiddle Encyclopedia.