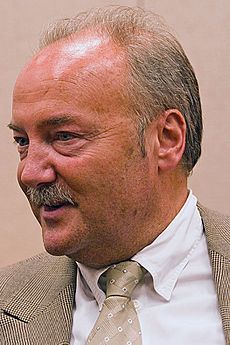 George Galloway (born 16 August 1954) is a British politician. He used to be in the Labour Party; he is now in the Respect Party.

Galloway was born and raised in Dundee, Scotland. He joined the Labour Party Young Socialists when he was 13 years old.

In 1983 Galloway became General Secretary of the London charity War on Want. Galloway was the Member of Parliament (MP) for Glasgow Hillhead from 1987-1997 and Glasgow Kelvin from 1997-2005. In 1998, he started a political campaign called the Mariam Appeal. Galloway became the Vice-President of the Stop the War Coalition in 2001. Galloway was made to leave the Labour Party in 2003. He has been a member of Respect since 2004. He was MP for Bethnal Green and Bow from 2005-2010. from 29 March 2012 to 8 May 2015 he was the Respect Party MP for Bradford West.

Galloway was a housemate in the 2006 series of Celebrity Big Brother.

Galloway stood in the 2016 London Mayoral election but did not win.

All content from Kiddle encyclopedia articles (including the article images and facts) can be freely used under Attribution-ShareAlike license, unless stated otherwise. Cite this article:
George Galloway Facts for Kids. Kiddle Encyclopedia.