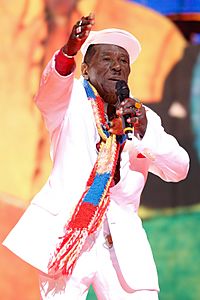 Clementino Rodrigues (14 November 1921 – 30 March 2020) was an Brazilian samba composer and singer. He was born in Salvador, Brazil. Riachão had several of his songs performed by national singers, one of the best known was "Vá Morar com o Diabo" and "Cada Macaco no Seu Galho ". Known for his samba music, other hits include "Retrato da Bahia" and "Bochechuda e Papuda".

Riachão died in his sleep at his home on 30 March 2020 in Salvador of a possible heart attack, aged 98.

All content from Kiddle encyclopedia articles (including the article images and facts) can be freely used under Attribution-ShareAlike license, unless stated otherwise. Cite this article:
Riachão (singer) Facts for Kids. Kiddle Encyclopedia.