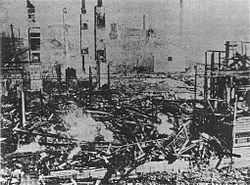 Suzuki Shoten in Kobe, burned during the Rice Riots of August 11, 1918

The Rice Riots of 1918 (米騒動, kome sōdō) were riots where many of the citizens of Japan became upset and rebelled against the government. This happened between July 1918 to September 1918. They caused the ending of the Terauchi Masatake government.

A very large rise in the price of rice caused very bad economic (money) problems, especially in rural areas (outside of cities) where rice was the main food of daily life for the people. Farmers, became angry at the government (who set the amount of money the farmer's made) and the rice merchants when they learned that they were making much less money for growing the rice than it was being sold for to the public. They blamed the government and the merchants for letting the price of rice rise so high. The rise in the price of rice happened just at the worst point in the rapid rise in prices in many things such as food and rents that was happening just after World War I. This caused problems for the people of Japan. The Siberian Intervention made things worse because the government themselves bought lots of rice to feed their soldiers who were outside of Japan. This made the price of rice rise even more. The government did not do anything to stop it, and it spread to the towns and cities.

The Rice Riots were the biggest, most violent and widespread in modern Japanese history. The first protest happened in the small fishing town of Uozu in Toyama Prefecture, on 23 July 1918. Starting with peaceful petitioning, the protest quickly grew into riots, strikes, looting, incendiary bombings of police stations and government offices and into armed fights. By mid-September 1918, over 623 protests and or riots had happened in 38 cities, 153 towns and 177 villages, with over 2 million people taking part in them. 25,000 people were arrested, and 8200 were convicted of crimes. Punishments were given including minor fines and up to the death penalty.

Prime Minister Terauchi said he and his cabinet were to blame for the riots, and they all ended their jobs on 29 September 1918.

People studying this part of Japanese history think that the riots and so the need for rice in some way may have caused the Japanese to grow their occupation of other countries. Evidence of this is thought to be the increase in rice production in Taiwan and Korea.

All content from Kiddle encyclopedia articles (including the article images and facts) can be freely used under Attribution-ShareAlike license, unless stated otherwise. Cite this article:
Rice Riots of 1918 Facts for Kids. Kiddle Encyclopedia.