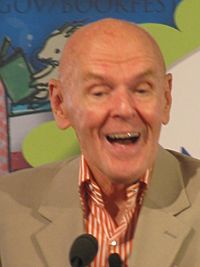 Richard Wayne Peck (April 5, 1934 – May 23, 2018) was an American novelist. He was born in Decatur, Illinois, but was raised in Chicago. He was known for his works to young adult literature. He was awarded the Newbery Medal in 2001 for his novel A Year Down Yonder (the sequel to A Long Way From Chicago).

All content from Kiddle encyclopedia articles (including the article images and facts) can be freely used under Attribution-ShareAlike license, unless stated otherwise. Cite this article:
Richard Peck Facts for Kids. Kiddle Encyclopedia.