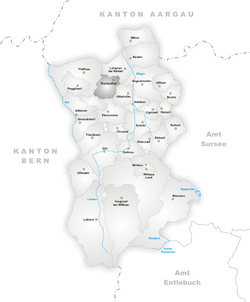 Richenthal is a village and former municipality of the district of Willisau in the canton of Lucerne in Switzerland.

On 1 January 2006 the former municipalities of Richenthal and Langnau bei Reiden merged into the municipality of Reiden.

All content from Kiddle encyclopedia articles (including the article images and facts) can be freely used under Attribution-ShareAlike license, unless stated otherwise. Cite this article:
Richenthal Facts for Kids. Kiddle Encyclopedia.