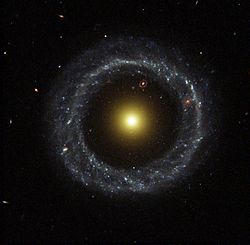 Hoag's Object, a ring galaxy. Another red ring galaxy can be seen behind it, at the one o'clock podition

A ring galaxy is a kind of galaxy that has a ring shape. Hoag's Object and NGC 1291 are two examples. The ring is made up of many massive, young blue stars, which are extremely bright. The middle of the galaxy contains far less luminous matter.

Some astronomers believe that ring galaxies are formed when a smaller galaxy passes through the center of a larger galaxy. Because galaxies are mostly made up of empty space, a collision rarely happens between stars. However, the gravitational disruptions could cause a wave of star formation to move through the larger galaxy. Other astronomers think that rings are formed around some galaxies when an accretion disc is formed. Star formation would then result from the shocks and compressions in the newly formed disc.

All content from Kiddle encyclopedia articles (including the article images and facts) can be freely used under Attribution-ShareAlike license, unless stated otherwise. Cite this article:
Ring galaxy Facts for Kids. Kiddle Encyclopedia.