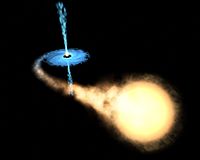 Artist's conception of a binary star system with one black hole and one main sequence star.

An accretion disc (or accretion disk) is an astronomical term. It describes a disc of material being drawn in by gravity to a centre of mass, such as a star or black hole. As the material comes in, it spins round the central body and radiates energy.

The central body is typically either a young star, a protostar, a white dwarf, a neutron star, or a black hole. As the material moves in, gravitational energy released in that process is transformed into heat and rotational movement.

The energy emitted at the disk surface is in form of electromagnetic radiation. The frequency range of that radiation depends on the central object. Accretion discs of young stars and protostars radiate in the infrared, those around neutron stars and black holes in the X-ray part of the spectrum.

All content from Kiddle encyclopedia articles (including the article images and facts) can be freely used under Attribution-ShareAlike license, unless stated otherwise. Cite this article:
Accretion disc Facts for Kids. Kiddle Encyclopedia.