The Riverside Inn was a wooden, three-story hotel on the banks of French Creek in Cambridge Springs, Pennsylvania. On the outside corner of the main and northwestern wings is a three-story, hipped roof tower. A 2 1⁄2-story, Shingle style, gabled structure called the Casino was originally built as a separate building southeast of the hotel, but is now connected to it. A 2,000-foot (600 m) boardwalk connected the hotel to the mineral springs. The only part of the boardwalk that remains are the concrete piers. A three-story, frame water tower with a hipped roof and hooded windows is located on the property. 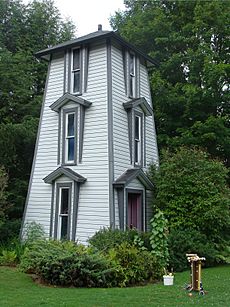 Water tower at the inn

In 1859, John H. Gray discovered a spring while searching for petroleum in the village of Cambridge, Pennsylvania. The village was incorporated into the borough of Cambridgeboro in 1866. Gray examined the water found in Hot Springs, Arkansas in 1884 and concluded that the water of his spring also had medicinal properties. Gray formed the Gray's Mineral Fountain Company in August 1884 and financed the construction of a sanitorium. The opening of the Riverside Hotel was postponed to July 1, 1888 by construction delays, but was the first built in Crawford County. Disputes between partners of in the company forced the hotel into receivership. In 1895, the Riverside was sold to William Baird. Baird also purchased Gray's mineral spring for $60,000. Cambridgeboro was renamed Cambridge Springs in 1897 to reflect the status of the borough as a spa town. Baird built a boardwalk from the hotel to the spring in 1899. Baird's son William Baird, Jr. took over management of the Riverside Hotel in 1910. A golf course was added in 1913, and was expanded to have 18-holes in 1923.

The American Medical Association came to the decision in its medical journal in 1908 that "mineral waters possess no mysterious or occult virtues in the treatment of disease." The organization put pressure onto many of the mineral spring resorts, through the Pure Food and Drug Act passed by Congress in 1906, forcing most to close by the 1920s. The Riverside stopped promoting the alleged health benefits of the springs, but was still noted for its other amenities such as the golf course.

When the Rider Hotel burnt down in 1935, The Riverside Inn was the only remaining hotel left from that era in the town's history. In 1946, Colonel Frank W. Parke bought the entire Riverside Establishment from the Baird family. He sold it in 1965.

In 1998, the U.S. Chess Championship took place in Cambridge Springs at the Riverside Inn.

In 2013, the Riverside Inn was featured in the Travel Channel television series The Dead Files which investigated alleged paranormal activity at the inn.

On May 2, 2017, a fire broke out in the kitchen early in the morning, and spread rapidly throughout the rest of the structure. By daybreak, the entire complex was destroyed.

All content from Kiddle encyclopedia articles (including the article images and facts) can be freely used under Attribution-ShareAlike license, unless stated otherwise. Cite this article:
Riverside Inn (Cambridge Springs, Pennsylvania) Facts for Kids. Kiddle Encyclopedia.