Kids Encyclopedia Facts
This page is about the former amusement park in Chicago. For other uses, see Riverview Park (disambiguation).

Riverview Park was an amusement park in Chicago, Illinois, which operated from 1904 to 1967. It was located on 74 acres (30 ha) in an area bound on the south by Belmont Avenue, on the east by Western Avenue, on the north by Lane Tech College Prep High School, and on the west by the North Branch of the Chicago River. It was located in the Roscoe Village neighborhood of Chicago's North Center community area.

Riverview was most known for The Bobs wooden roller coaster. Other popular coasters were The Comet, The Silver Flash, The Fireball and the Jetstream. Aladdin's Castle was a classic fun house with a collapsing stairway, mazes and turning barrel. Shoot the Chutes, Hades, the Rotor, Tilt-a-Whirl, Wild Mouse, the Mill on the Floss (Tunnel of Love), and Flying Turns were just a few of the many classic rides. "The Pair-O-Chutes at Riverview Park'll shake us up all day" is a line from the Beach Boys' song "Amusement Parks U.S.A." from their 1965 album, Summer Days (And Summer Nights!!). There were supposedly over 120 rides in the park.

The Riverview Park grounds were owned by George Schmidt, which initially served as a private skeet shooting range. Immediately across the street, on the east side of Western Avenue, was George Schmidt Motors. There, George Schmidt senior sold new Sunbeams and Hillmans and other British cars from the Rootes Group (Humbers, Commers, etc.) and George Schmidt junior raced his sportcar named the Li'l Stinker, a white Sunbeam Alpine convertible with a cute skunk in a yellow circle painted on the doors and bonnet. 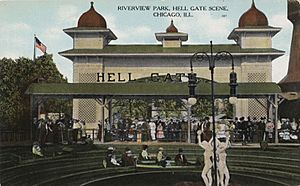 "Big Bill" Haywood, the Industrial Workers of the World leader, once spoke here to a crowd of almost 80,000 people.

The former grounds are now home to Riverview Plaza shopping center, the Belmont District Police Station, DeVry University, a manufacturing company and Richard Clark Park, part of the Chicago Park District. The south end of Clark Park has a wooded area where many of the Riverview Park foundations are still visible and is currently used as a bicycle dirt jump and pump track park maintained by the Chicago Area Mountain Bikers. A sculpture entitled Riverview by local artist Jerry Peart stands in front of the police station.

Items from the park are now quite valuable. Many items from the old park, as well as many paintings portraying Riverview in its glory days, once on display at its namesake, Riverview Tavern, located on the corner of West Roscoe Street and Damen Avenue from 2005 to 2018. The Riverview Carousel continues to operate at Six Flags Over Georgia. It was the only ride to be saved.

The 1972, Bally Manufacturing Corporation pinball machine Fireball was named after the park's Fireball roller coaster. Also, Bally's Aladdin's Castle amusement arcade division was renamed from Carousel Time to honor the closed Riverview Park and the Aladdin's Castle funhouse. Bally's Aladdin's Castle pinball machine was also inspired by the same funhouse at Riverview. The 1979 Williams Electronics' pinball game Flash as well as their 1985 Comet was named after the park's roller coasters with these names. Bally Manufacturing Corporation and Williams Electronics, Inc. had their headquarters and primary manufacturing facilities just west of Riverview Park during the later years of the park's operating life.

All content from Kiddle encyclopedia articles (including the article images and facts) can be freely used under Attribution-ShareAlike license, unless stated otherwise. Cite this article:
Riverview Park (Chicago) Facts for Kids. Kiddle Encyclopedia.