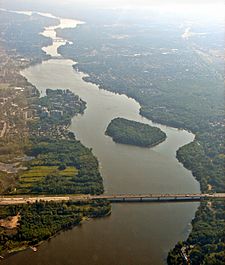 The Rivière des Prairies (pronounced [ʁivjɛʁ de pʁɛʁi]; literally River of the Prairies, sometimes called the Back River in English) is a delta channel of the Ottawa River in southwestern Quebec, Canada. The indigenous inhabitants of what's now known as the Island of Montreal called it Skowanoti, meaning "River behind the island".

All content from Kiddle encyclopedia articles (including the article images and facts) can be freely used under Attribution-ShareAlike license, unless stated otherwise. Cite this article:
Rivière-des-Prairies, Quebec Facts for Kids. Kiddle Encyclopedia.