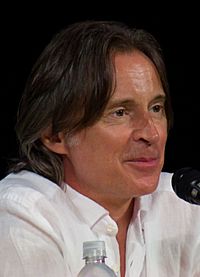 Robert Carlyle OBE (born 14 April 1961) is a Scottish actor. His movie work includes Trainspotting (1996), The Full Monty (1997), The World Is Not Enough (1999), Angela's Ashes (1999), The 51st State (2001) and T2 Trainspotting (2017). He television credits include Hamish Macbeth, Stargate Universe, Human Trafficking and Once Upon a Time. He won the BAFTA Award for Best Actor in a Leading Role for The Full Monty and a Gemini Award for Stargate Universe.

Carlyle was born in Maryhill, Glasgow. He has been married to Anastasia Shirley since 1997. The couple have three children. He is a supporter of Rangers Football Club.

All content from Kiddle encyclopedia articles (including the article images and facts) can be freely used under Attribution-ShareAlike license, unless stated otherwise. Cite this article:
Robert Carlyle Facts for Kids. Kiddle Encyclopedia.