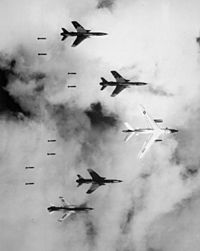 The role of the United States in the Vietnam War began after World War II and escalated into full commitment during the Vietnam War from 1955 to 1973. The U.S. involvement in South Vietnam stemmed from 20 long years of political and economic action. These had the common incentive of ending the growing communist domination in Vietnam. At the time, French forces, allies of the U.S., were backed by America — President Harry S. Truman provided progressively increasing amounts of financial and military assistance to French forces fighting in Vietnam. From the spring of 1950, their involvement increased from just assisting French troops to providing direct military assistance to the associated states (Vietnam, Laos, Cambodia). Eventually, U.S. missions were carried out at a more constant rate by sending out increasing number of military assistance from the United States. Their main intent was to restrict the Communist domination that was present in the government of Vietnam as they thought it would soon lead to a chain of neighboring countries adopting the same. This would have resulted in a change in balance of power throughout Southeast Asia. The U.S. foreign policy establishment saw national security interests being disturbed due to the rise of this communist expansion and strived to take any measure to end it. Their actions came to be questioned by other segments of government and society, however, including the US congress.

All content from Kiddle encyclopedia articles (including the article images and facts) can be freely used under Attribution-ShareAlike license, unless stated otherwise. Cite this article:
Role of the United States in the Vietnam War Facts for Kids. Kiddle Encyclopedia.