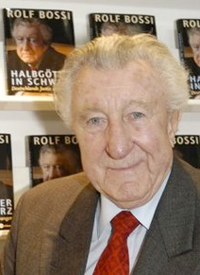 Rolf Bossi (10 September 1923 – 22 December 2015) was a German criminal defense lawyer. He was born in Munich. He was known for defending known actors such as Ingrid van Bergen and Romy Schneider, as well as notable criminals such as Jürgen Bartsch, Dieter Zlof, and Dieter Degowski. He also defended four former East German border guards who were accused of having killed Chris Gueffroy, who was trying to escape over the Berlin wall. He was considered to be one of Germany's best-known defense lawyers.

Bossi died in Munich, Germany from natural causes at the age of 92.

All content from Kiddle encyclopedia articles (including the article images and facts) can be freely used under Attribution-ShareAlike license, unless stated otherwise. Cite this article:
Rolf Bossi Facts for Kids. Kiddle Encyclopedia.