Romneya is a genus of flowering plants belonging to the poppy family (Papaveraceae). There are two species in genus Romneya, which was named for Irish astronomer John Thomas Romney Robinson. They are known commonly as Matilija poppies ( MƏ-til-I-hah) or tree poppies and are native to California and northern Mexico.

They are perennial subshrubs with woody stems. They may grow to a height of 2.5 meters (8.2 feet) and a width of 1 m (39 in), with the flowers up to 13 cm (5.1 in) across. The silvery green leaves are deeply cut, with a small fringe of hairs at the margins.

They are notable for their large white flowers with intense yellow centers, blooming in summer. Romneya produce the largest flowers of any members of the poppy family. These flowers prefer a warm, sunny spot and fertile soil with good water drainage. They are not easily grown but once established are difficult to remove. In the wild, they are known as "fire followers" as they can be frequently, but not exclusively, found in burned areas. It is also known as the "fried egg flower" or "fried egg plant". 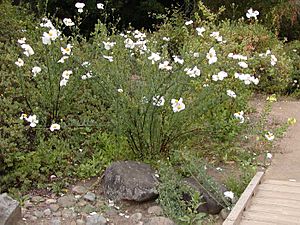 The two species are:

All content from Kiddle encyclopedia articles (including the article images and facts) can be freely used under Attribution-ShareAlike license, unless stated otherwise. Cite this article:
Romneya Facts for Kids. Kiddle Encyclopedia.