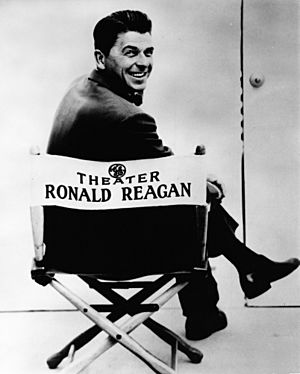 Ronald Reagan as the host of General Electric Theater

This is a list of movies of all of Ronald Reagan's most prominent onscreen acting roles as well as narrating roles. Also, included in this list are some of Reagan's special cameo appearances. He retired from acting so that he can be active in politics. He was elected Governor of California and soon President of the United States.

All content from Kiddle encyclopedia articles (including the article images and facts) can be freely used under Attribution-ShareAlike license, unless stated otherwise. Cite this article:
Ronald Reagan filmography Facts for Kids. Kiddle Encyclopedia.