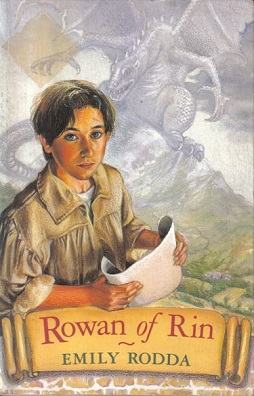 Rowan of Rin is a children's fantasy novel by Australian author Emily Rodda. It is the first in the five-book series of the same name. It was first published in 1993 and re-released in 2003 together with the fifth and final book in the series: Rowan of the Bukshah. In 1994, the novel won the Children's Book of the Year Award for Younger Readers.

One morning the people of Rin wake up to find that the stream that flows down from the mountain has slowed to a trickle. By nightfall, it dries up completely and the villagers are really sad and start crying before facing an unprecedented crisis. The stream is essential for the survival of the bukshah, the herd of animals that plow the land and are rich sources of wool and milk, and hence also for the survival of the people of Rin. Because of the severity of the situation, six of the strongest, bravest villagers and the weak boy, Rowan, decide to climb the mountain - considered forbidden territory, with tales telling of a dragon living at its peak - in order to see what is wrong at the source of the stream. Strong Jonn of the Orchard, Brandon the furniture-maker, Marlie the weaver, Allun the baker, and Val and Ellis, the twin millers, volunteer to make the perilous journey. Then mysterious things take place in the mountain. They also had a mountain map but was blank until rowan held it and it all showed. and the stream starts to flow again. In this novel, the mountain holds many surprises including; swamps, forests, and dangerous caves. The one part of the prophecy that Rowan remembers is that "Bravest Heart Will Carry On". This makes him feel like he will soon be hurt or even die, but in the end, he discovers that he is the bravest as he fought all of the challenges of the mountains whilst being scared.

The other books in the Rowan of Rin series are:

All content from Kiddle encyclopedia articles (including the article images and facts) can be freely used under Attribution-ShareAlike license, unless stated otherwise. Cite this article:
Rowan of Rin (novel) Facts for Kids. Kiddle Encyclopedia.