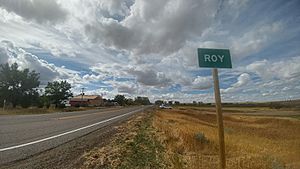 Roy is an unincorporated community and a Census-designated place in Fergus County, Montana, United States. The community is located along U.S. Highway 191 in northeastern Fergus County. Roy has a post office with the ZIP code 59471. As of the census of 2010, there were 108 people.

The post office opened in 1892. The Milwaukee Land Company platted the townsite in 1913.

Roy has a semi-arid climate (Köppen BSk) with cold winters except when moderates by chinook influences that will typically push maximum temperatures over 50 °F or 10 °C on seventeen days during winter and twelve days each in November and March. Spring is mild and frequently thundery, whilst summer days are hot – sometimes very hot – but nights are usually pleasantly cool.

Precipitation is fairly scarce, mostly coming from thunderstorms during late spring and summer, whilst snowfall averages 43 inches or 1.09 metres (the median is 30.9 inches or 0.78 metres) but significant falls occur on only a minority of winter days. However, during the cold winter of 1977–78, cover reached 56 inches or 1.42 metres on February 19 and averaged 46 inches or 1.17 metres for the whole month of February.

All content from Kiddle encyclopedia articles (including the article images and facts) can be freely used under Attribution-ShareAlike license, unless stated otherwise. Cite this article:
Roy, Montana Facts for Kids. Kiddle Encyclopedia.