The Rugby League Heritage Centre was formerly located in the basement of the George Hotel, Huddersfield, West Yorkshire, England. It was the only rugby league heritage museum and was the brainchild of Sky Sports presenter and former Great Britain international Mike Stephenson. 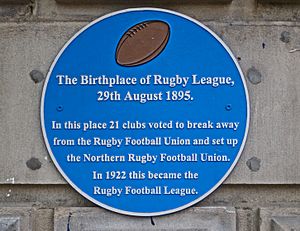 Commemorative plaque to the foundation of Rugby League on George Hotel, Huddersfield

In 2013, the hotel was sold. The sporting charity, Rugby League Cares, was given £97,200 from the Heritage Lottery Fund to secure the collection. The collection was put on tour and in storage until a new location could be arranged.

In 2016, plans were announced for a new National Rugby League Museum, based in nearby Bradford, to succeed the Heritage Centre.

All content from Kiddle encyclopedia articles (including the article images and facts) can be freely used under Attribution-ShareAlike license, unless stated otherwise. Cite this article:
Rugby League Heritage Centre Facts for Kids. Kiddle Encyclopedia.