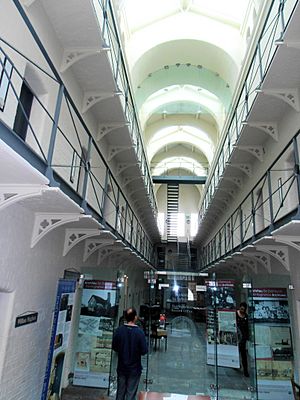 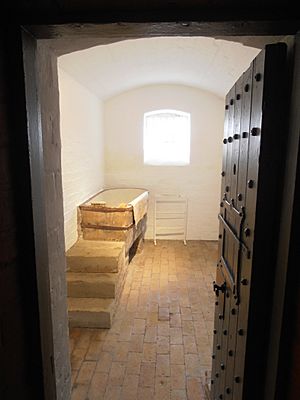 One of the cells

Ruthin Gaol (Welsh: Carchar Rhuthun) is a Pentonville style prison in Ruthin, Denbighshire. Ruthin Gaol ceased to be a prison in 1916 when the prisoners and guards were transferred to Shrewsbury. The County Council bought the buildings in 1926 and used part of them for offices, the county archives, and the town library. During the Second World War the prison buildings were used as a munitions factory, before being handed back to the County Council, when it was the headquarters of the Denbighshire Library Service. In 2004 the Gaol was extensively renovated and reopened as a museum.

The first House of Correction, or Bridewell, was built at the bottom of Clwyd Street, next to the river, in 1654, to replace the Old Court House, where able-bodied idlers and the unemployed were sent to work. Following John Howard's investigations into prison conditions the Denbighshire justices resolved to build a new model prison in Ruthin on the site of the old Bridewell. Work began in January 1775. In 1802 the prison had four cells for prisoners and nine rooms for debtors. By 1837 it could hold 37 inmates. The Prisons Act of 1865 set new standards for the design of prisons — as the Ruthin County Gaol did not meet the standards plans were drawn up for a new four-storey wing, and the new prison accommodating up to 100 prisoners, in the style of London's Pentonville Prison was built at a cost of £12,000. On 1 April 1878 the Ruthin County Gaol became HM Prison Ruthin, covering the counties of Denbighshire, Flintshire, and Merionethshire.

Most Haunted: Midsummer Murders filmed the series' 5th episode in Ruthin in which the team investigated a Victorian Era murder. Some of the places the episode was filmed in were the Old Gaol and the town library.

All content from Kiddle encyclopedia articles (including the article images and facts) can be freely used under Attribution-ShareAlike license, unless stated otherwise. Cite this article:
Ruthin Gaol Facts for Kids. Kiddle Encyclopedia.