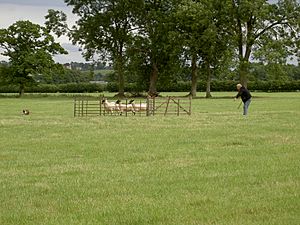 It features several agricultural show staples such as features of Equestrianism and competition between farmers as to the quality of Livestock.

Established in 1855, the Ryedale show has run almost continuously for over one hundred-and-fifty years. In 2007 the show was cancelled for the second time ever because of torrential rain the preceding week and a waterlogged show field. It was cancelled in 2020 because of the COVID-19 pandemic.

All content from Kiddle encyclopedia articles (including the article images and facts) can be freely used under Attribution-ShareAlike license, unless stated otherwise. Cite this article:
Ryedale Show Facts for Kids. Kiddle Encyclopedia.