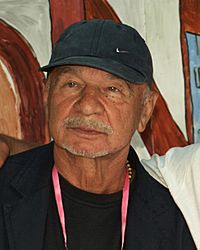 Ryszard Kotys (20 March 1932 – 28 January 2021) was a Polish actor. He appeared in more than 140 movies and television shows during his career. His career lasted from 1953 until his death. Kotys was born in Mniów, Poland. He was best known for his roles in Operacja Himmler, Shivers and Świat według Kiepskich.

All content from Kiddle encyclopedia articles (including the article images and facts) can be freely used under Attribution-ShareAlike license, unless stated otherwise. Cite this article:
Ryszard Kotys Facts for Kids. Kiddle Encyclopedia.