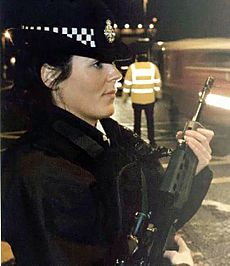 Female police officer of the Ministry of Defence. She carries a L85A1 rifle

SA80 (Small Arms for the 80s) is the name of a weapons family used by the British Army and Royal Marines. All are of bullpup design: this means the magazine is behind the trigger so the weapon is shorter yet still has a long barrel.

The series includes an assault rifle known as the L85 and a Light Support Weapon (LSW) designated the L86 as well as a carbine variant for helicopter crews and a bolt action army cadet variant.

The LSW variant is far more accurate than its predecessor, and is used in army FSGs (Fire Support Groups). They are amazingly accurate for their size (Army marksmanship tests were redesigned after the SA80 introduction because it was so accurate). Nevertheless, the SA80 family has been plagued by poor reliability. They have had an upgrade by the German arms company H&K when it was British owned. This resulted in the A2 series, but not all models have been upgraded.

The SA80 also has a cadet force variant (L98 A2 Cadet GP) that is the same size, and is used throughout the ACF. It has a success rate far higher than the old, bolt-action A1 version.

All content from Kiddle encyclopedia articles (including the article images and facts) can be freely used under Attribution-ShareAlike license, unless stated otherwise. Cite this article:
SA80 Facts for Kids. Kiddle Encyclopedia.