Kids Encyclopedia Facts
For the other SLS-branded building in Brickell, see SLS Lux. 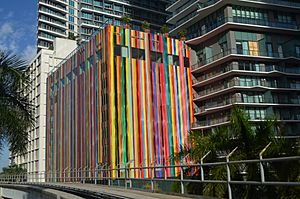 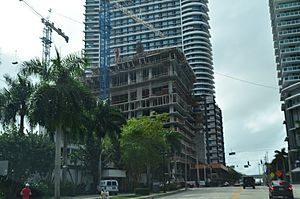 SLS Brickell under construction in 2014

The SLS Hotel & Residences Brickell is a high rise building in the Brickell district of Miami, Florida. The project includes 450 condominium units in addition to the 133 room hotel. With the exception of a few penthouses, the project sold out before breaking ground. The project is located at 1300 South Miami Avenue, next to the Infinity at Brickell; it replaces the second phase of that project. There is another SLS-branded building a few blocks north known as SLS Lux.

All content from Kiddle encyclopedia articles (including the article images and facts) can be freely used under Attribution-ShareAlike license, unless stated otherwise. Cite this article:
SLS Brickell Facts for Kids. Kiddle Encyclopedia.