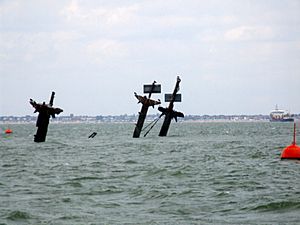 The SS Richard Montgomery was an American ship built during World War II. Montgomery was wrecked off the coast of Kent in 1944 with around 1,500 tons of explosives on board, which continue to be a hazard to the area

All content from Kiddle encyclopedia articles (including the article images and facts) can be freely used under Attribution-ShareAlike license, unless stated otherwise. Cite this article:
SS Richard Montgomery Facts for Kids. Kiddle Encyclopedia.