ST Sea Alarm was a 263-ton tug which was built as Empire Ash in 1941 for the Ministry of War Transport (MoWT). She was sold in 1947 and renamed Flying Fulmar. She was sold in 1956 and renamed Sea Alarm. On retirement in 1973 she became an exhibit at the Welsh Industrial and Maritime Museum in Cardiff, but was controversially scrapped in 1998 after the forced closure of the museum. 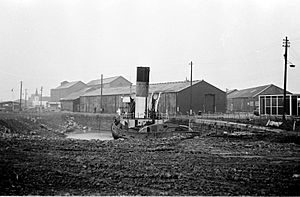 Sea Alarm laid up in Cardiff Docks in 1976, before restoration

All content from Kiddle encyclopedia articles (including the article images and facts) can be freely used under Attribution-ShareAlike license, unless stated otherwise. Cite this article:
ST Sea Alarm Facts for Kids. Kiddle Encyclopedia.