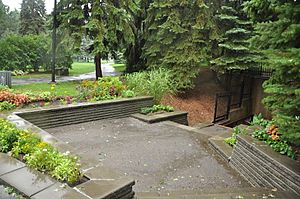 The Saint-Léonard Cavern or la caverne de Saint-Léonard is a cave on the island of Montreal, in Quebec, Canada. It is located underneath Pie-XII Park (Pius XII Park) in the borough of Saint-Léonard in Montreal. It is a registered historic site with restricted access and guided tours.

The cave was discovered in 1812. During the Patriote Rebellion of 1837, it served as an armoury, weapons cache, and hidey-hole for Les Patriotes. In 1968, the government deemed it a safety risk and closed off the cave. In 1978, the Quebec Speleological Society reopened the cave for study. It was subsequently declared a historic landmark, and tours were set up. Until 2017, the cave was thought to be comparatively small underground structure, at 35 metres long with a depth of 8 metres. However, a second cave was discovered in 2017 which measures 250 metres long. This dimension may be extended with further exploration.

All content from Kiddle encyclopedia articles (including the article images and facts) can be freely used under Attribution-ShareAlike license, unless stated otherwise. Cite this article:
Saint-Leonard Cavern Facts for Kids. Kiddle Encyclopedia.